The lithium-ion battery is undoubtedly one of the most important inventions in the last century. So important was this technology that the Nobel Prize in Chemistry in 2019 was awarded to the scientists that contributed to its development. Whether it is the handphone or laptop you are currently using, or the Tesla that you see on the road, they all contain lithium-ion batteries. In our increasingly electrified world, with widespread adoption of electric cars and trains, construction of more electrical energy storage systems and even potentially commercialisation of electric aircraft, our use of batteries would only increase. According to Statista, global demand for batteries is set to grow from 185 GWh in 2020 to over 2000 GWh in 2030, driven mainly by the electrification of transport.

A battery converts chemical potential energy stored in the materials within it to electrical energy that is used to do work in the external load. Its two key components are the anode and cathode. The typical lithium-ion battery has LiCoO2 as its cathode material and a graphite anode that is able to allow intercalation of lithium atoms. Lithium ions shuttle between the two electrodes during charge-discharge cycles.

The graphite that is used to make the anode can either be of natural or synthetic origins. While natural graphite occurs in three forms, amorphous, vein/lump, and flake/crystalline, only the “flake” or crystalline form can be used to make the anode. Currently, most of the natural “flake” graphite that is being used to make batteries are being mined in China. On the other hand, synthetic graphite is produced as a byproduct of oil refining or from crushing and roasting a mined product. While synthetic graphite may be the costlier option, its higher purity makes it the preferred choice for higher-performance batteries. The largest producer of synthetic graphite is the US and most of it is produced as a byproduct from refining oil. The anodes in most batteries are made of a mix of synthetic and natural “flake” graphite.

As it turns out, the fossil fuel industry is, in fact, a producer of a key component material of batteries! This synthetic graphite is made from treating the residual oils left behind from the distillation process to high temperature and high pressure. Thus, in our attempt to decarbonise our energy sources through diverting capital away from the fossil fuel industry, we may inadvertently disrupt the supply chains for an essential material which the electrification of our world heavily relies on. If we do not find an alternative to this form of synthetic graphite, then we would have no choice but to ensure that our oil refineries continue to operate so as to supply us with a steady flow of high-quality anode material. 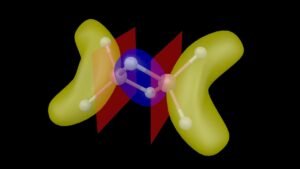 An introduction to molecular orbital theory